Who should have a prominent ear operation?

It is needed if the ears' prominent appearance upsets the child or his/her family, and if the child is teased at school due to this condition.

Prominent ear is an inherited problem, i.e. children whose mother or father has prominent ears are more likely to have this problem. It is more common in Celtic and Japanese people. It is observed with the same incidence rates in women and men. However, it affects boys more than girls because girls can conceal it with their hair.

In children with congenital prominent ear problem, the cartilage of the ear is soft, and this allows for the correction of the prominent ear deformity by means of the molding and banding procedures; however, these treatment procedures should be performed within the first 3 months, when the cartilages can be reshaped. Treatments administered after this period fail.

When the child reaches the age of three, the pinna reaches 85% of the adult size. The ideal age for prominent ear surgery is between 4 and 6 years. Doing the surgical operation at an early age prevents the child from being psychologically injured, and allows for reshaping the cartilage more easily when they are soft. 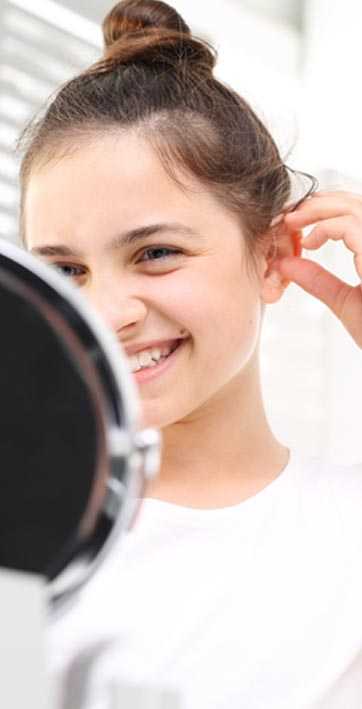 Are the results of prominent ear surgery permanent?

The ears can be expected to slightly unbend after prominent ear surgery. Adults are at a greater risk than children in this regard. When the surgery is performed with a proper method, and if a bandage is used for an adequate period of time, the risk is minimized.

What are experienced after surgery?